The οne $ million fundraising completed by the local Greek community, with lead sponsor Mr. Evangelos Marinakis, safeguards the operation of a department that was destined to close, with the creation of the “Miltiadis Marinakis Professorship for Modern Greek Language and Culture”.

There was a time when Modern Greek Studies at universities around the world were a top priority for every incoming Greek education minister.

Just after the turn of the millennium Modern Greek Studies Chairs were thriving at many universities internationally due to the trend of seeking out the sources of Greek culture.

For many today such chairs are viewed as a luxury and they too suffered a blow from the Greek financial crisis and their influence was limited. For Greece it became solely an issue of numbers crunching and the state distanced itself from these programmes and admirers of Greek culture were perplexed.

In the US, however, the large and strong Greek community and private donors still recall that foreign universities always had serious reasons to create chairs in the modern Greek language and culture.

Over the last years, with half a million Greeks having migrated abroad the significance of Greek studies programmes at foreign universities has grown because a new generation of Greeks need to preserve their vital ties to the Greek language.

At the century-and-a-half old Ohio State University which is known for its excellent programmes and for the fact that it has the largest number of graduates nationwide, the Greek torch has been lit once again.

The local Greek community launched a massive fundraising effort with Evangelos Marinakis and his family as basic donors. The results were impressive. One million dollars was raised to save the Chair in Modern Greek Studies where the faculty includes internationally renowned scholars, some with unique specialisations.

The Miltiadis Marinakis Chair in Modern Greek Language and Culture thus signals a new era with the reaching of the funding targets and the restructuring of the programme within the framework of the Classics Department.

The course offerings will include “National Identity and Greek Tradition”, “Greek-American Society and Culture”, Modern Greek language and others.

Aside from their teaching and research duties, the professors will organise events with important authors outside the university. All of the programme’s activities will be brought to the attention of the public through social media and the university’s web radio.

“In the US there is a very different framework than Greece’s for the teaching of Byzantine and modern Greek culture,” To Vima was told by Antonis Kaldellis, a respected Byzantinist who chairs the Classics Department ay Ohio State.

“These areas of study are part of a national narrative and identity. In the US they are just two of many traditions competing to attract the interest of our students. Hence, their existence must be justified in order to be established.

Modern Greek attracts students due to the importance of the Greek-American Community, which is a successful model of a minority community in American society,” Kaldellis said.

“Greek also attracts students due to the importance of Greek global shipping. Simon Fraser University for this reason has developed internet platforms to teach modern Greek to Chinese students. Classics majors are attracted for their own reasons, [so as to track the evolution of the language],”he added.

“Let us not forget that Byzantium and its culture is recognised ever more as a captivating intermediate space between Western Mediaeval Europe and early Islam. Some of my students chose Byzantine studies due to the video game “Assassin’s Creed” to learn how the empire managed to last for so long [over 1,000 years].”

A chair with a long tradition of service

Ohio State’s Modern Greek Studies programme has had a long and distinguished academic past.

Yorgos Anagnostou, the director of the Greek programme, specialises in Greek-American Identity and the diaspora. Chrostopher Brown teaches modern Greek language, and Gregory Jusdanis aside from his teaching duties has become a globe-trotting ambassador at universities abroad and in the Greek communities of Turkey and Argentina.

He said that, “One of the joys of teaching at Ohio State University for so many years is that I meet up with former students – sometimes I recognise them and at others I feel uneasy because I don’t.” He recently had second-generation Greek-American students who were children of former students from the 1980’s and 1990’s.

The academic mosaic of the programme includes a Laboratory for Greek Dialectology led by internationally renowned linguist and Distinguished University Professor Brian Joseph who is the President of the American Linguistics Association and a member of the American Academy of Arts and Sciences.

Local pres reports have highlighted the fact that the programme teaches Greek beginning with the Mycenaean period to Linear B to Modern Greek dialects such as those of Southern Albania and Cephalonia.

“The Modern Greek Studies programme at Ohio State University is unique in America and possibly elsewhere,” Joseph told To Vima.

“Here you can study the Greek language diachronichally through all the phases of its development as a member of the Indo-European family of languages – from Mycenaean to Homeric Greek to classical and Hellenistic Greek to Byzantine and modern Greek. There is great interest in all the periods,” he said.

“When I taught a course in Ind-European linguistics a few years ago 20 students registered, including students from the Classics Department and the Modern Greek Studies Programme. Last year when I taught Mycenaean Greek with renowned Ancient Greek Professor Fritz Graf we had 15 students enrolled. Naturally, the programme includes Modern Greek culture and literature and Greek-American studies, but it is unique in its linguistic span,” Joseph said.

The representatives of the modern Greek Studies Chair collaborate closely with the University of Athens’ Summer Greek Studies Scholarships (THYESPA) programme which was established to cultivate ties between Greek universities and universities abroad and was the brainchild of the former general secretary of the University of Athens, Panagiotis Kontos.

“We place great emphasis on students experiencing the language and so we use books from Greek publishers. Once they have reached a certain level our students usually practice with the Greek radio course in which they write and produce their own shows. Yet there is no substitute for study in Greece. That is why we are grateful to the THYESPA programme,” he said.

How it all started

Professor Elissaios Taiganides, who is one of the most active members of the Greek community of Columbus, Ohio, had a football-related [soccer] university story to tell.

“In the 1960s a group of simple but exceptional Greeks gathered in Columbus in the heart of the US. Some of us ended up on the faculty of Ohio State and were followed by ten new “arrivals” from Greece who lacked professional qualifications. Some were immigrants from Greece and others had American University degrees,” he said.

“The new non-professional immigrants constituted the group which established the “Olympiacos Football Club» for a sport that most Americans had never heard of. That enlivened the Greek community which gathered around the local Greek Church which in turn organised dances and various events to raise money to build a football (soccer) field and a Greek Church. Educated Greek immigrants were elected to lead the community and raised 7mn dollars to build a beautiful Greek Orthodox Cathedral which has become a tourist attraction in the area,” said Taiganides.

“Greeks without university degrees but who were smart and active by 1996 had married and had children who played football, which is now the most popular sport in the area, especially among girls,” he added.

“Soon we turned our attention to charitable and cultural events and we renamed our club as the Greek Olympic Society (greekolympicsociety.org). Now an effort has been launched by local donors of Ohio Olympic Paideia – including Elias Adamantidis, Yorgos Bavelis, Christos Bouzounis, Demetris Sikaras, Nikos Soulas, Yorgos Sourvanos, Manolis Tsagournis, Christos Gesios and others – to help us hire one more professor at Ohio State so as to ensure the continuation of the Chair in Modern Greek Studies in perpetuity.

Asked “Why now?” Taiganides said, “It is because the use of the Greek language is now limited to our church services. Second-generation Greek priests can read Greek but cannot speak the language easily. That is why it was recently proposed to conduct the Divine Liturgy in English. The proposal was rejected when those of us who came to the US from Greece threatened to reduce our financial contributions.”

“The way to preserve the Greek language in the diaspora is teaching that language and culture at the university level, educating the future leaders of our Greek-American Communities,” he underlined.

Today the Greek School in Columbus is located on the church premises and has been operating for over a century. It has an indoor basketball court, ten Greek School classes, and events halls. About 70 students between the ages of five and fourteen are enrolled and are taught by eight teachers, some of whom are students in the university’s Greek Studies Programme.

Who was Miltiadis Marinakis?

The Modern Greek Studies Chair at Ohio State University has been named in honour of Evangelos Marinakis’ Father Miltiadis Marinakis.

Miltiadis Marinakis was born in 1930 in Iraklio, Crete. Before WWII the family owned the best known foundry on Crete and a ship repair workshop. The bells it produced still grace the churches of Crete and the business exported its products to Italy, France, and the Dalmatian Coast. 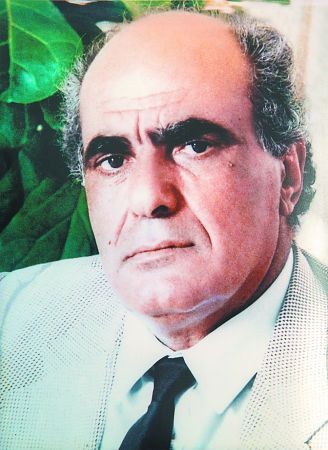 During WWII the family estate was completely lost and Miltiadis Marinakis entered the Greek Resistance of the groups EAM and EPON.

He studied at the Merchant Marine Academy and in 1958 moved to Piraeus where he worked on ship repairs and established his own shipping company.

In 1979 he participated in a group of shipowners which founded the pre-existing Olympiacos FC as a stock company (SA).

Between 1978 and 1986 Miltiadis Marinakis entered politics and received the most votes in the Piraeus City Council race.

A ‘city’ of learning and creativity
With about 50,000 students and a 10,000-strong teaching staff Ohio State University is quite different from Greek universities.

Today it has 48 faculties and 20 research centres with 180 different majors taught in 30 languages.

Many of its graduates are listed on the Forbes 500 and Forbes 400.

The facilities are like a small, ultra-modern city on a 1,764-acre campus with 571 buildings with classrooms, auditoriums, and workshops. It has over 40 dormitories and is the 18th largest university library in the US with 5.8mn volumes.

It has a concert space and a university hospital with over 1,500 beds and about 65,000 admissions annually.

As in most American universities, athletics is an important part of campus life. Ohio State has a 110,000-seat stadium, the fourth largest among all US universities.

It also operates the 20,000-seat Schottenstein Center for basketball, hockey, and special events and the 10,000-seat Jesse Owens Memorial Stadium, for football and track. It also has a lacrosse field, as well as many other athletic facilities.