The Greek businessman has been recognised for his charity work

Nottingham Forest owner Evangelos Marinakis has been awarded a special medal in his homeland.
The Greek businessman, who also owns Olympiacos, was honoured at a charity concert which had been organised by Metropolitan Seraphim of Piraeus and which Marinakis had supported.
The Reds chief received the Grand Cross of the Holy Temple of St. Spyridon the Wonderworker in recognition of his charity work.
UNESCO Goodwill Ambassador Marianna Vardinoyannis also supported the concert and was recognised.
Former Nottingham Forest ace makes play-offs prediction - and Derby fans won't like it!
And Marinakis said he was honoured to receive the gong at the Beauceio Theatre.
He said in a statement: “I would like to thank you for this medal for this very important distinction.
“I would like to promise you once again, and history has shown that we keep our promises, that I will be on your side for as long as we have our health, strength and the ability to do what you dream of for the Metropolis of Piraeus, and for the help you offer to the weaker layers and to all Piraeus.
“The same is true of the Municipality of Piraeus, because Piraeus is the city we worship, we have grown up and we are very pleased to be next to the Municipality, as well as to Mrs Marianna Vardinoyannis.
“Be sure that the coming years will be next to you, in the function of ‘hope’ and for another time I would like to thank you all for this very nice evening.
“Be good and the best I wish to you.”
Source: https://www.nottinghampost.com/sport/football/football-news/nottingham-forest-owner-evangelos-marinakis-2866682 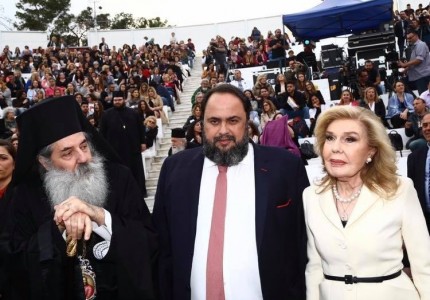