A Webinar on Greek Culture and Education by “Capital Link”, marks the establishment of the “Miltiadis Marinakis Endowed Professorship” at Ohio State University

With anxiety about the preservation of Greek religious and ethnic character in America mounting, viewers with gloomy expectations turned optimistic about that future after the April 7 Capital Link Webinar," Culture and Education among Greek Americans," featuring key Greek American leaders in culture, education, business, and philanthropy discuss the roles of their organizations in the preservation of Greek culture in the United States. 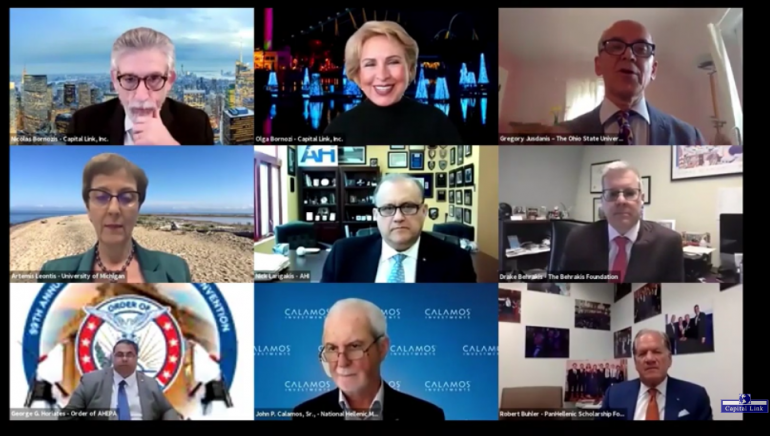 The third panelist, Evangelos M. Marinakis, Chairman of the Capital Maritime & Trading Corp., spoke about his late father, Miltiadis Marinakis, "a passionate supporter of Greek ideals" in whose memory the endowment was established. "I have come to appreciate how vital it is for us to educate the future generations about Greek Culture and Modern Greece, especially in the US, which is home to a vibrant Greek American community." 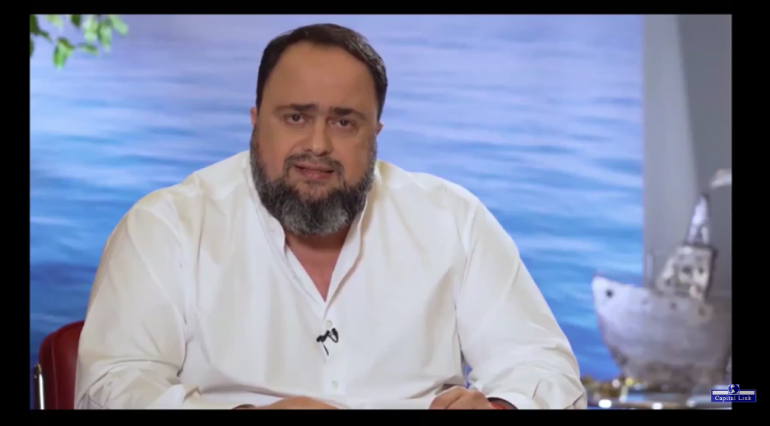 He wishes to address, through his philanthropic work, the troubling development of universities and governments reallocating resources from the arts and humanities towards the sciences, resulting in decreased knowledge of cultural diversity, language, and tradition, among individuals and societies. "We would like young people from all over the world to have access to modern Greek language and culture. It is not only a way to preserve the cultural identity of Greek Americans but also to introduce people of other ethnic or multicultural origins and nationalities to our culture."

With Evangelos M. Marinakis as lead sponsor, Ohio Hellenic Paideia (OHP) in Columbus, Ohio, initiated and completed a new round of fundraising between 2015-2020, to safeguard the continuing operation of the Modern Greek Studies Program at Ohio State University. 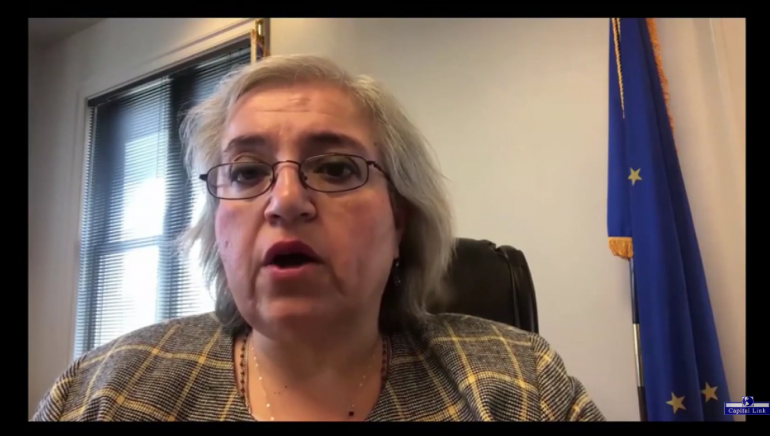 His Eminence Archbishop Elpidophoros of America, in his introductory remarks, stated, "We should "proudly celebrate the ongoing commitment of Greeks, both in the Motherland and in the Diaspora, to the promotion and advancement of our cultural, linguistic, ethical, and, indeed, spiritual, values. The spiritual values of Greece are the bridge between the exceptional aspirations of the Greek philosophical mind, and the preaching of the Gospel of our Lord Jesus Christ, which first came about in the Greek language. We cannot separate Greek Culture from the Greek language, for the latter is the vehicle that conveys the former. Moreover, as Greek Orthodox Christians, we bear the awesome responsibility of safeguarding and preserving the very language of the New Testament. This language of the New Testament became the language of the liturgy and theology of the Church, which, as the Apostle says, is the "pillar and ground of truth. Therefore, our grateful celebration of the establishment of the Miltiadis Marinakis Chair is more than a local cause for joy of The Ohio State University. It is a cause for rejoicing across the Diaspora, for it bears witness to the commitment of our Λαός to the never-ending pursuit of truth, which is the very nature " 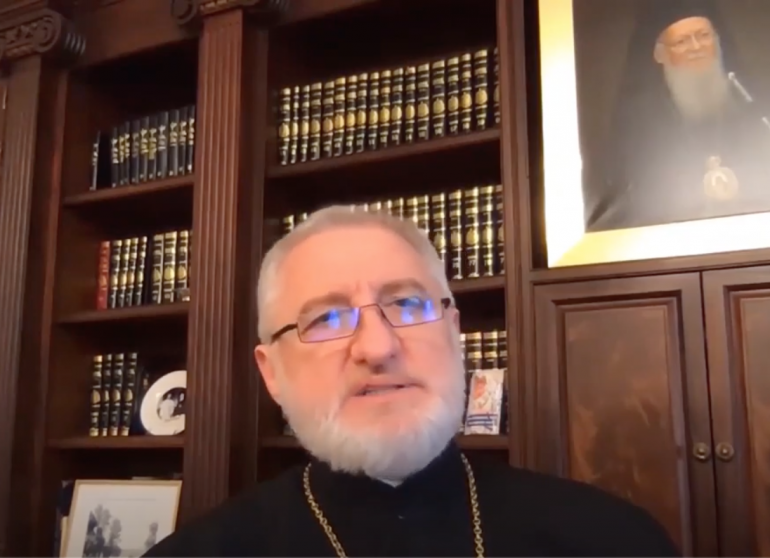 "I am certain that under the direction of the accomplished scholar, Dr. Yiorgos Anagnostou, this venture will beget great fruit," Her Excellency Mrs. Alexandra Papadopoulou, Ambassador of Greece in the US, said, congratulating the Board of Trustees of Ohio State University, the Hellenic Paideia of Columbus, Ohio, and lead donor Mr. Evangelos M. Marinakis. for establishing the Professorship, and Capital Link for applying the same excellence to highlighting the importance of culture and education that it normally applies to organizing business conferences to

"It is critical for us that education and culture remain at the center of our existence, placing great emphasis on preserving our history and culture... a set of values, beliefs, aspirations, social practices, and traditions that are shared by a people. This body of knowledge continues to be transmitted to succeeding generations, transcending boundaries and borders, making us who we are and who we aspire to be."

"You don't know where you're going unless you know where you came from," said John P. Calamos, Sr., Founder of Calamos Investments and Chairman of the National Hellenic Museum (NHM) in Chicago. Discussing his passion for educating future generations about Hellenism, Calamos strives, through the NHM, to perpetuate Hellenism and Orthodoxy with programs that focus on Greek language, heritage and culture, for the Greek American community and philhellenes of all ages—including the many younger children that visit the Museum though school groups and other programs—and at a national level,

Significantly, Calamos noted the NHM's current work on digital opportunities to expand HNS programs to reach a broader audience and exploring ways to collaborate with other institutions in the US and Greece. Everyone needs to work together to contribute to the survival of Hellenic culture and to engage future generations, he said, "It's about providing a foundation for our children, which is extremely important."

Drake Behrakis, of The Behrakis Foundation; Board Chairman of the National Hellenic Society Organization and President of Marwick Associates, said The National Hellenic Society's (NHS) mission is to preserve, protect and support our heritage and culture by reconnecting and embracing our Hellenic roots. "Too many Greek Americans have lost their ethnic identity. We want to be a beacon for the promotion, understanding and appreciation of our heritage and to pass on stewardship to the next generation.by sponsoring and initiating programs, whether it's by partnering with the Best of the Best or developing our own unique signature programs for the benefit of our community."

The Behrakis Foundation, a private charitable foundation, supports Hellenic causes in the arts, education, health and sciences, with gifts such as the Greek and Roman Art Wing of the Boston Museum of Fine Arts; support to the Greek Orthodox Church and its ministries; the Smoke-Free Greece Campaign; the Greek Cardiology Fellowship at Mass General-Brigham and Professorships and Program Support at various universities.

Mr. Robert Buhler, Chairman of the PanHellenic Scholarship Foundation and President and Chief Executive Officer of Open Pantry Food Marts of Wisconsin, Inc., stated that annually, the PanHellenic Scholarship Foundation awards $250,000 to 40 Greek American college students throughout the US, and after the upcoming 2021 Awards Ceremony will have distributed a total of $3.75 million to over 600 Scholars. The mission of the PanHellenic Scholarship Foundation is to promote the education of high-achieving Greek American college students in America to help them become leaders in their field. "Our founder, the late Chris P. Tomaras, established the Foundation because of his personal struggles in attaining a higher education. He wanted to ensure that brilliant Greek American youth did not have to experience similar struggles."

In addition to generous scholarships, 'Beyond a Scholarship' provides access to strong mentoring relationships, excellent job internships that can lead to good jobs, educational programs and a large alumni network.

Process: The Academic Committee evaluates the Hellenic engagement of each applicant, and to advance future leaders, specifically seeks high achieving students who actively engage with Hellenism. Hellenic Studies must go beyond marketing to only Greek students, "It needs to identify, help create, and nurture Philhellenes. After all, Philhellenism has been vital for the survival of Hellenism and enhances its significance," he said.

George G. Horiates, Supreme President of the Order of AHEPA puts value in programs that support cooperation between Greece and the US, and stressed how much the implementation of educational programs would inspire young people of the two countries, especially in 2021, with the courage and resilience found in Greek History.

A common thread in perspectives of assessment, whether the faculty members' or the students', is the deep, life-changing impact of their studies in Modern Greek. This is especially, though not exclusively true of students who identify as Greek American, said Leontis. "What matters in this broader discussion of 'Culture and Education among Greek Americans' are the specific terms in which students articulate the deep impact of their Modern Greek studies," which has changed over time from feeling validated as Greeks in the US, or being able to study their parents' language (as opposed to ancient Greek), to having a richer understanding of their place with respect to postclassical Greece, their own ethnic roots, racial politics in the West, and the global power of the US."

Nick Larigakis, President of the American Hellenic Institute (AHI), is optimistic that Greek culture, language, and traditions will continue in some form in the Greek American community, but he has great concern about future generations' continued engagement with the policy issues of the Greek American community. Toward that end, the American Hellenic Institute Foundation (AHIF) conducts an annual College Student Foreign Policy Trip to Washington, DC, Greece, and Cyprus, throughout which the students experience first-hand the foreign policy issues affecting Greece and Cyprus, and the interests of the U.S. in the region. And while Greek language and classical programs should continue, contemporary Greek history and the history of the Greek American community itself should be included. Good news: In a push for the inclusion of contemporary Greek history in academia, the AHIF partnered with the Center for Byzantine and Modern Greek Studies, Queens College, to co-publish the Journal of Modern Hellenism (JMH), and the AHIF is compiling and publishing a comprehensive volume containing all of the work and documentation if its "Future of Hellenism" conferences of the past 18 years.