The U.S. blacklisting of Chinese ships has oil buyers scrambling for capacity and has pushed American crude exports to record highs

The cost of moving oil around the world has hit an 11-year high as producers scramble to find new supertankers following a U.S. blacklisting of a major Chinese operator that has sidelined dozens of ships.

"The market has gone bonkers by shock events like the Cosco tankers being blacklisted," said George Lazaridis, head of research and valuations at Athens, Greece-based Allied Shipbroking. "It's a bubble that could get bigger because of geopolitics before it bursts."

Shipping executives say the U.S. action late last month over allegations that the vessels were tied to illicit shipments of Iranian crude has hit more than 40 tankers operated by a subsidiary of Cosco Shipping Energy Transportation, one of the world's largest tanker owners and a major carrier for China's oil needs.

But with Iran and Venezuela oil exports also under U.S. sanctions and Saudi Arabian oil production still trying to recover from a missile attack in September, oil traders have been turning to the U.S. for crude shipments.

The longer distance to move oil cargoes from the U.S. to Europe and Asia compared with moving them from the Middle East, has pushed daily charter rates for the big ships called very large crude carriers to their highest level since July 2008, according to Baltic Exchange data. 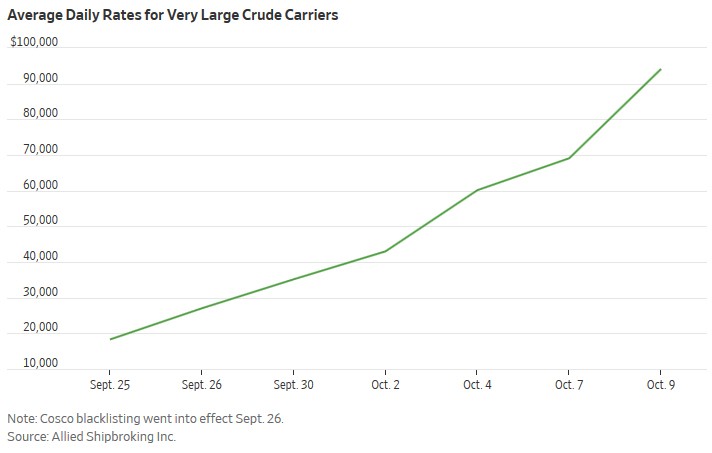 "There is a lot of confusion and uncertainty out there," said Paolo d'Amico, head of Intertanko, a trade body representing tanker owners. "Everyone is afraid of being hit by the U.S., sanctions, rendering about 50 VLCCs untouchable."

U.S. oil exports to Europe, which usually move in smaller tankers, hit a record 1.8 million barrels a day for the week ending Oct. 7, according to Kpler, an energy market intelligence company. The figure is double the 924,000 barrels in the previous week. But shipments to Asia, which are typically done on VLCCs, were reduced almost in half to 508,000 barrels.

A Singapore broker said rates for some VLCC cargoes on sailings from the U.S. Gulf Coast to the Far East were more than $120,000 on Thursday. Average earnings for supertankers picking up cargoes from around the world hit $94,124 a day, up from $18,284 on Sept. 25, when Washington blacklisted the Cosco fleet.

"VLCCs to Asia are a rare commodity, the market is red hot and will stay that way while the U.S. sanctions on Cosco ships are in place," said the broker, who asked not to be named because he isn't authorized to talk to the media.

To get an edge in the oil market, traders turn to satellites, shadows and a lot of fancy math. Photo illustration: Laura Kammermann

Senior U.S. and Chinese officials squared off in trade talks Thursday at a pivotal moment in the countries' relationship with President Trump planning to meet with the head of the Chinese negotiating team, Chinese Vice Premier Liu He, when the talks are scheduled to conclude Friday.

People with knowledge of the matter said the Chinese delegation planned to bring up the tanker ban during the talks.

Cosco Energy's parent company, state-owned Cosco Shipping Group, is the world's biggest shipping operator in terms of overall capacity, operating more than 1,100 vessels of all types, including container ships, tankers and bulk carriers. The company is also a part of Beijing's multitrillion-dollar Belt and Road initiative that aims to establish infrastructure and distribution channels to help extend China's influence around the world.

The Cosco tanker ban covers around 6% of the global VLCC fleet but other factors are leaving shipping capacity tight. Many large tankers and smaller ships are in dry dock being retrofitted with sulfur-trapping exhaust systems ahead of a regulation to clean up ship emissions that goes into effect in January.

"The [freight rate] expectations going into 2020 were already high because of the 2020 climate regulations," said Evangelos Marinakis, chairman of Athens-based Capital Maritime & Trading Corp., which operates 10 VLCCs. "With so many geopolitical and industry-specific factors now pushing the market, it's hard to predict when it will settle. But we expect the current strength to continue well into next year."