Soccer club donates 3,000 food parcels to the homeless after match washed out

The idea of social justice is deeply rooted in the English county of Nottinghamshire. After all, the city of Nottingham and the surrounding Sherwood Forest are believed to be the traditional haunts of legendary outlaw Robin Hood.

The local football team has been following in the footsteps of its folklore hero — who famously stole from the rich to give to the poor — by donating food to homeless people in the community.

On Saturday, Nottingham Forest, who play in English football's second tier, provided almost 3,000 parcels of food to a local homeless charity, after its game against Reading on Saturday was called off due to a waterlogged pitch.

Nearly 3,000 pies, pasties, sausage rolls, and other "terrace" food were given to the charity Framework, who work to help homeless people across Nottingham, according to a club spokesperson.

According to the UK's Office for National Statistics there were an estimated 726 deaths of homeless people in England and Wales in 2018 -- a 22% increase on the previous year.

Over the last few years supporters of a number of British football clubs — notably Liverpool, Everton, Newcastle, Arsenal as well as Rangers and Celtic in Scotland — have set up food banks to help people struggling financially. Forest also works with a food bank called Hope Nottingham.

Jumped into a van

Forest's match against Reading was abandoned just a few hours before kickoff but the club had made "provisions" to avoid waste. 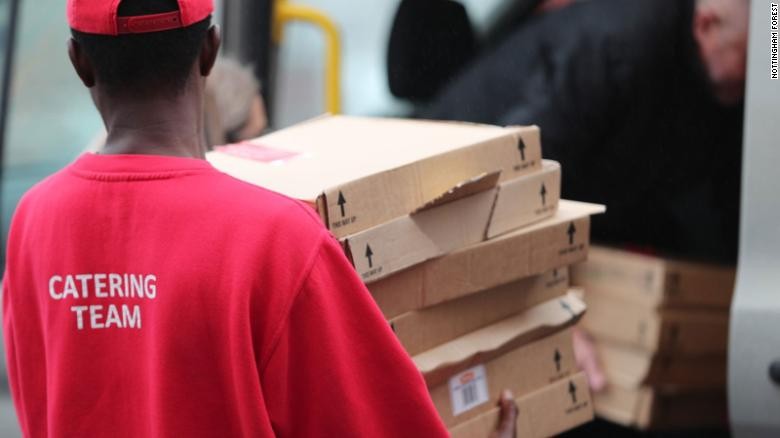 Forest told CNN Sport that this was something they have done before when games were canceled but that Saturday's action had been more planned.

"We were trying to make the best out of the situation when the game was canceled," the club said.
Forest's CFO Samantha Gordon and Community CEO Graham Moran even "jumped into a van" to help deliver the food.

Game off but nothing goes to waste ????
#NFFC CFO Samantha Gordon and @NFFC_Community CEO Graham Moran helped to hand out food left over from today’s postponed game to @Framework_HA. pic.twitter.com/Xfw5RqdNxA

"These kind of initiatives are of paramount importance to Nottingham Forest Football Club, coming straight from our owner Evangelos Marinakis who is a great believer in working in the community to help the area improve and grow," Club Director, Jonny Owen said.

"By donating these food items, we were able to help those who need it most in the Nottingham community, those people who are at the sharp end of homelessness, as we continue to try and tackle the issue in the city," he continued.

Tom Crossland, who has supported Nottingham Forest his whole life, said: "I think it's great. In this day and age we waste so much. I am surprised it didn't end up in the bin," he told CNN Sport.

"Forest do a lot of work in the community now with local schools and they do a big camp out to raise money for homeless charities."