Suggestions about spreading out supply chains are going nowhere in the shipping world, where companies are ordering big vessels targeting China’s hefty exports

While supply-chain experts are stepping up talk about moving manufacturing to new sites, container ship operators are putting down big bets that the world's factory floor will remain in China.

Shipping lines have placed, or have in the wings, orders for dozens of new ultra-large box ships designed to move massive amounts of cargo on each voyage. Vessels like the six behemoths capable of carrying 23,000 containers apiece that Germany's Hapag-Lloyd AG recently ordered are meant for the world's big trade lanes between China and Europe.

Other carriers are taking on ships nearly as large, with capacity for about 15,000 of the standard 20-foot containers. These ships fill trade lanes between China and the U.S., routes that in recent months have been backed up with vessels filled to the brim with goods.

Such orders demonstrate that as far as the companies that move most of the world's transported goods are concerned, global trade in the era after Covid-19 restrictions are lifted will look much like the pre-pandemic world, with Chinese manufacturers pushing furniture, electronics and other manufactured products to Western markets.

"The focus is back on manufacturing production in China and shipping operators are reacting by sending more capacity there due to the robust growth in the trans-Pacific trade," said Evangelos Marinakis, chief executive of Capital Maritime Group.

The Athens-based shipowner has laid out $1.1 billion since the beginning of the year for 10 new large box ships and nine used vessels. Capital Maritime is a heavyweight in energy and commodities trade transport, operating 94 tankers, gas carriers and dry bulk carriers.

Mr. Marinakis is one of many owners that expect to capitalize on what looks to be an industry supercycle, as western retailers from e-commerce giants like Amazon.com Inc. to mom-and-pop shop owners, restock shelves on the back of strong consumer demand in the U.S. and Europe.

Other operators with big orders at hand include some of the shipping industry's biggest players, like Hong Kong-based Seaspan Corp. , France's CMA CGM SA, Hapag-Lloyd and Switzerland-based Mediterranean Shipping Co. 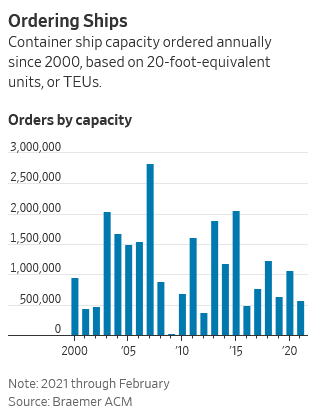 Orders for large container ships last year were up 64% in terms of capacity compared with 2019, according to London-based Braemar ACM Shipbroking, with 61 orders added in the fourth quarter of last year, the highest three-month tally since the third quarter of 2015. Braemar ACM expects a total of 58 new orders in this year's first quarter, up from only five a year ago.

The buying spree comes as China's manufacturing economy is rebounding from the downturn in the first half of 2020 driven by lockdowns aimed at halting the spread of the coronavirus.

Chinese exports have been steadily rising since last June and hit record highs in the last two months of 2020. In November, exports by value soared 21% from the year before and were up 18% in December to a new record of $282 billion, according to global data provider Trading Economics. Other production centers like Taiwan and Vietnam are also hitting record export levels, but those countries are much smaller than China in terms of box volumes or ship calls.

Most of the new ship orders are for ultra-large container vessels that can move more than 10,000 boxes, and up to a maximum of 24,000. These ships are deployed in the two busiest ocean trade routes, from Asia to Europe and across the Pacific, and the vast majority load up first in China.

That is because shipowners are convinced that the enormous production network China has built over the past 20 years, a sprawling system of factories that churns out electronics, toys, clothing, medicine and industrial goods for the rest of the world, will remain a driving force of trade.

"China is delivering what the American and European consumers are asking," said Peter Sand, chief shipping analyst at Copenhagen-based industry trade body Bimco. "There's been talk that some production should be diversified to circumvent the U.S.-China trade war and the rattled supply chains from Covid. But importers are back in China big time, because that's where you can get the goods you need."

The manufacturing rebound has been a boon to shipowners like Seaspan that charter their ships to big operators and have been seeing leasing rates at record highs.

"The ship comes out of one charter and the next day it's got another with three-quarters of the loadings coming from Chinese ports," said a senior executive of a European owner of more than 25 box ships. "Up until a year ago and before Covid we would pop champagne for a six-month lease with about a third of the daily freight rate. Now we pass on such inquiries. What we really need is more ships."

With China's labor costs about one-fourth of those of the U.S., according to the World Bank, and its distribution networks designed to facilitate exports of goods on a large scale, setting up factories in the West or elsewhere to replace Chinese manufacturing or make up for production lapses remains a daunting logistical proposition.

China boasts seven of the world's 10 biggest ports, including Shanghai, the runaway leader in terms of volumes. Shanghai on average handles nearly three times as many containers every year as the neighboring California ports of Los Angeles and Long Beach combined.

"There's been a lot of industry talk of an importer push for greater diversity in sourcing options across a wider Asian origin along with assertions that near-sourcing would be just around the corner," said Alan Murphy, chief executive of Denmark-based Sea-Intelligence ApS.

"With the sharp recovery in the trans-Pacific since last July, all this has been forgotten. China will remain the dominant source for containerized cargo and the ships will go where the cargo owners need them," Mr. Murphy said.

This could change, of course, if China's manufacturing costs start to rival those in the West. But as long as high demand brings ship operators more boxes and cash, they are putting their money behind the current front-runner.